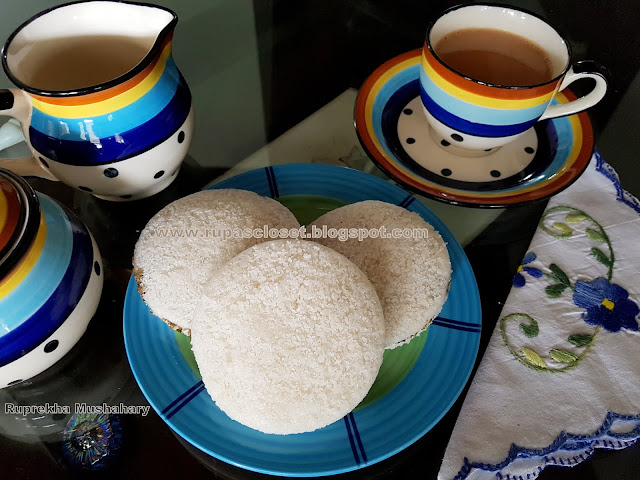 Best to serve as Breakfast 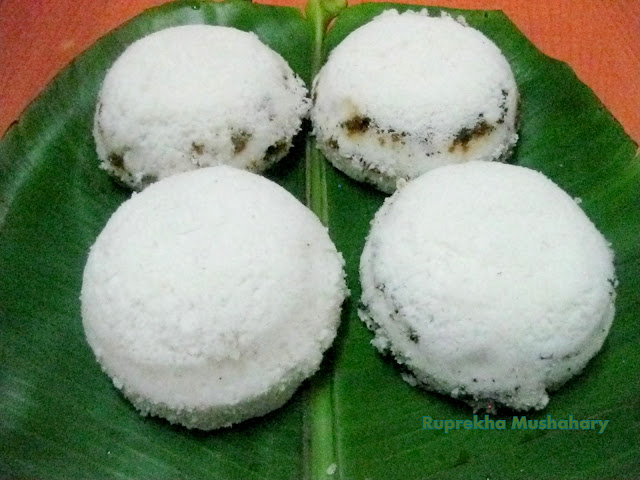 This Pitha is a popular snack of the people of the North Eastern region of India, a favourite of the Assamese. It is quite easy to make, healthy as well as a filling pitha.
To make 7 to 8 pithas you need only three ingredients: 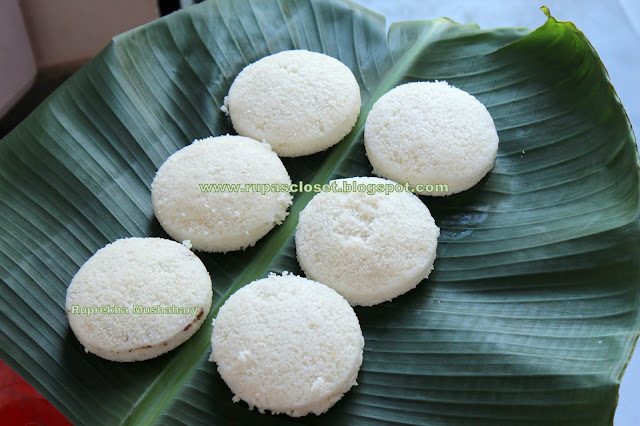 These pictures above and below show the smaller size of Pithas, for which half a kilo of  rice will make 12 Pithas on the lid of a small kettle. 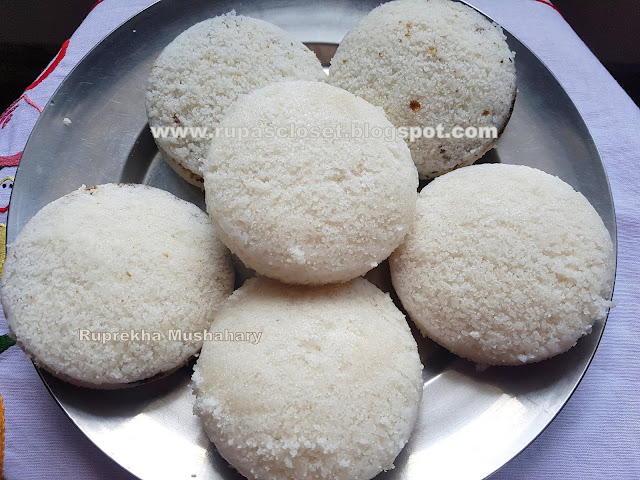 Few Assamese terminologies :
1.Pitha : A snack, rice powder is the main ingredient. Pithas are of quite a few variety, both sweet and savory.
2.Joha Saol : A variety of tiny grained rice with a delicious aroma.
3.Tekeli : Pitcher
4.Mukhot Diya : To put on the mouth or to place on the mouth.
5.Goor : Jaggery
6.Teel : Sesame seed
7.Saolor guri : Rice powder 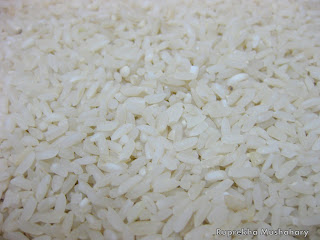 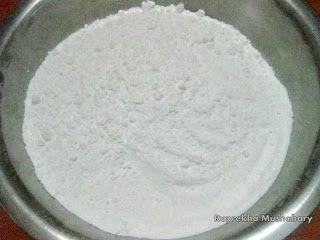 To make 7 to 8 pithas you need only three ingredients:
1.Freshly ground powder of 850gm Joha Saol. Before grinding, wash rice, soak for an hour and keep for an hour taking out of water so that  the water drains out.
Any other variety of rice can also be used, but I love the aroma and the taste of Joha rice best for this Pitha. 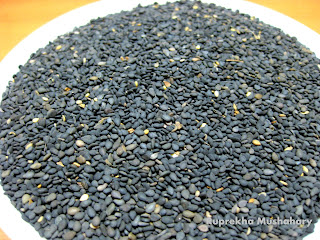 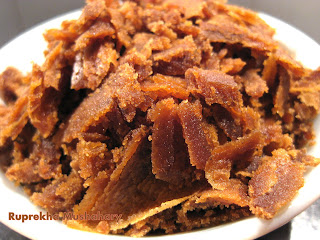 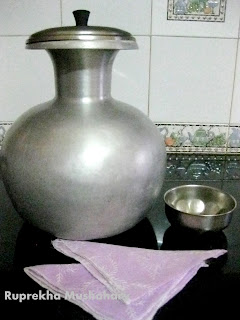 "Tekeli mukhot diya pitha" meaning of this is, to make the pitha by placing or steaming it on the mouth of a tekeli i. e. a pitcher or a kettle. Apart from the tekeli, you also need a small bowl to shape the pitha, the size of which should be that of the mouth of the tekeli and 2 soft damp napkins.
Method: 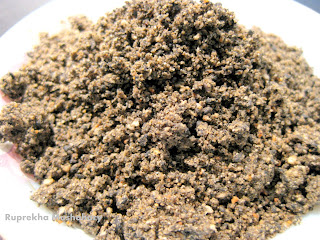 Grind teel, but not fine. Mix goor with teel. Both the ingredients can be used separately layering the pitha. 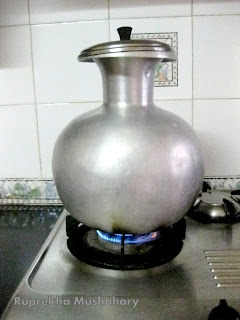 Boil water in the pitcher 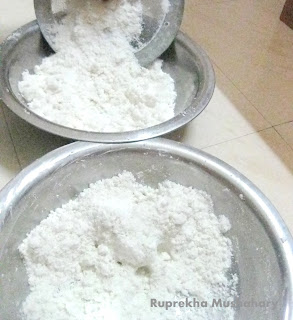 The most important part of making this pitha is to prepare the Saol guri. Add little water and knead well, too much water will spoil the pitha by making it sticky. It should remain powdery but some amount of water must be fed to the Saolor guri. Sieve it through a steel strainer so that no lumps remain. 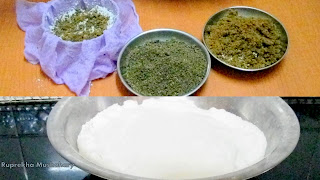 Place a damp napkin on the bowl, spread saoolor guri-teel-goor in layers, top layer being saolor guri. Press with your hand. The pitha will take the shape of the small bowl. 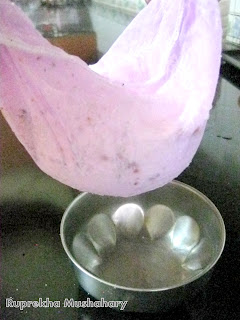 Wrap this with the napkin, hold both edges and lift up from the bowl. 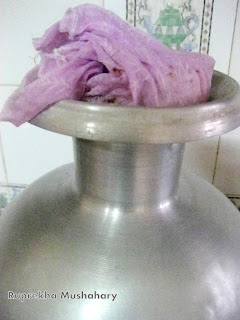 Place it on the mouth of the tekeli..... 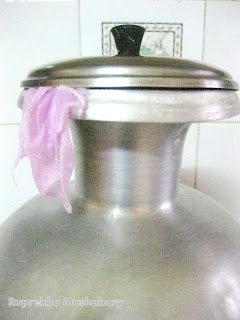 ...and put on the lid. The pitha will be cooked by the steam of the boiling water in the tekeli. Steam only for 3 to 4 minutes. 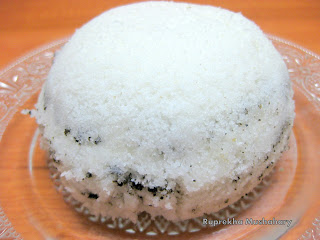 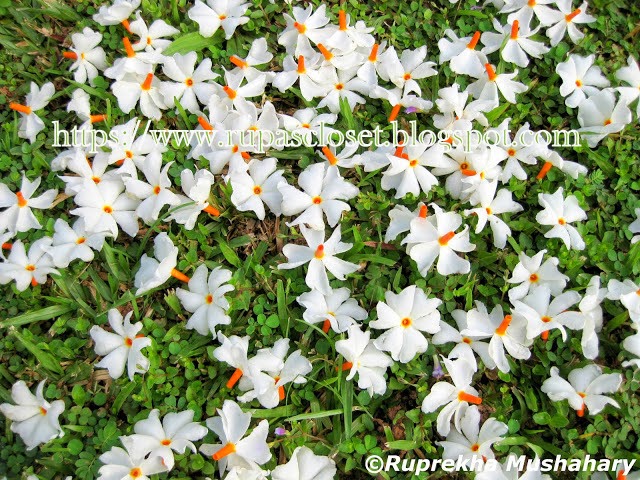 Autumn has arrived. Once again, autumn is here to soothe the mind and body, that was extremely tired, sweaty, struggling through those long sultry months of summer. I know autumn is here as there is fragrance in the air now ... yes, autumn has arrived as I can inhale the redolence of the dew dampened grass ... I know this is autumn as I see the cuddling pair of doves that perch on the Neem tree by the window of my room preparing to bring in their babies. All over I can see the air enceinte with soft autumn, bright and lovely, perhaps in anticipation. But, that one fragrance I long to inhale deep, that one soft and sensuous feel I so desire, the joyous lightness in the air is lost somewhere... lost forever ... no more to be found ... 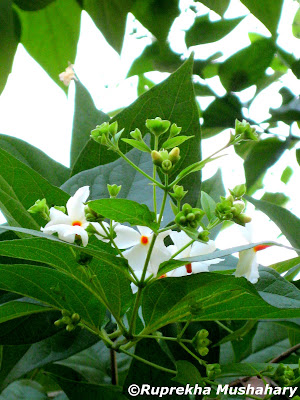 Loved the transition from summer to autumn as a pony tailed, chubby cheeked, bright eyed little girl. "But why is autumn associated with melancholy ? Isn't it freshening after a long summer", I would wonder. As my ever-brimming-with-joy kind of a nature refused to associate autumn with melancholy. "Well,  is it because soon winter would be here, the sky turning grey, keeping most of us indoors?" I would muse. No, I would put my foot down against this thought of cold sadness ! I should not think so, enjoy was all I should in this autumn. This was the festive season, festivity all around and in the air, then why should I worry about winter now which was still far in the horizon !

That was quite a few years ago, I would think with a chirpy mind, jump around with a feather light gait as if I was floating in the air. Ascending the flights of stairs with a light skip of two steps at a time was a fond habit, humming at all times. Bejeweled with a crisp smile on my face and eyes, I embraced life with a glorious warmth.

Every year, during the months of September, October and November, the two tall and bushy shrubs of Sewali in my Aaita's garden would be bedecked with tiny white flowers which looked like twinkling stars with an orange dot in the centre and a long stem of the same orange hue on each of them. The entire garden would be filled with sweet fresh fragrance of Sewali making the autumn atmosphere irresistibly magical. Although Aaita remembered it too well, I never forgot to remind her to wake me up early before going to bed. The house maid's daughter was my constant mate during those years of growing up in my Koka-Aaita's home in this quiet and peaceful township in the upper region of the State. Her name was Sewali, till this day I wonder why was she named after a flower. Rocky, the naughty black and white pup, a cross between a Lhasa Apso and Pomeranian was the one followed Sewali and me all over the huge compound starting from the pond and cow shed to the sprawling front garden and the grove at the back with dozens of fruit and betel-nut trees. 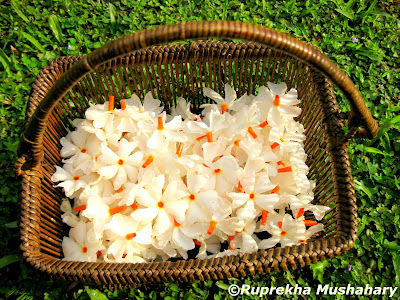 Sewali and I would run out to the front gardens, bare-footed each morning carrying in our hands our prettily woven  bamboo baskets, Koka had bought us in the weekly market. How lovely the feet  felt as they touched the dew soaked soft damp grass ! The raw smell that the damp grass emitted was so freshening ! Sewali would say, "If only the grass remained this damp in summer too!" I promptly replied as the learned grandma, "Then we would have sweat on our body as well as under our feet." We both  burst out laughing to our own innocent fun. The two trees of Sewali were much inside on either side of the huge iron gate and the drive that separated the lawns leading to my Koka's spacious, high roofed Assam type house. By the time we arrived upon the Sewali trees, most of the flowers would have fallen on the dew soaked greens of the lawn, making it look like a breathtakingly beautiful floral carpet ! Ah such a splendid sight ! Time was all we seemed to have those days, never remembered hurrying up for anything. Talking incessantly of flowers and the tiny insects that crawled up our feet and hands while picking up the Sewali flowers, chasing butterflies, giggling every now and then for no obvious reason was still fresh in my mind. With our small hands we picked baskets full of Sewali flowers, although it was never enough to fill our hearts. There would still be plenty of Sewali left strewn on the lawns. Fragrance of Sewali would not only linger on in Aaita's puja room but also wafted through the entire house always, during the months of autumn. My most loved  part was when I sat under the Sewali tree holding Rocky in my arms and Noren the gardener gave a good jerk to the tree letting the flowers fall off all over us. Rocky would roll over the thick carpet of flowers, Sewali and I would giggle through out. We would run in and out of the house to collect thread or needle to make  garlands and offered to Goddess Lakshmi, Durga and Saraswati. Tying strings of Sewali to our ankles and wrists gave us immense pleasure. Oh what an enormous amount of fun we had tying garlands on Rocky's neck and decorating him with the flowers! How wonderful autumn was ! This was my autumn, my loving, comforting, fun-filled  autumn, how could I forget my autumn ! 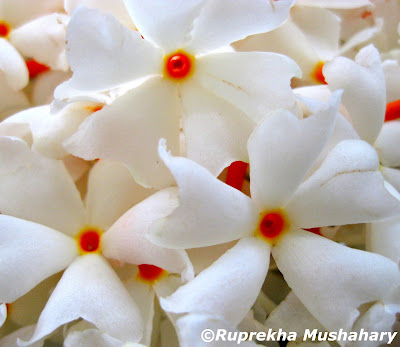 Too many seasons passed by, leaving me completely unaware of Sewali blooming and perfuming the autumn air without fail. Only I long shut my window, never trying to turn even once that side since. Many years from those lovely autumns, too many seasons later, there comes one more autumn, bringing along the mystique aura and the melancholy. I no longer ask nor wonder why, as I have experienced both autumn and melancholy too many an autumn. The window was long closed for the fragrance of Sewali to waft in. On the threshold of autumn of my life, melancholy seems to be my only sincere mate. All others have left me on one season or the other, while some live on, close to me, yet without being a mate, making all my seasons look the same. 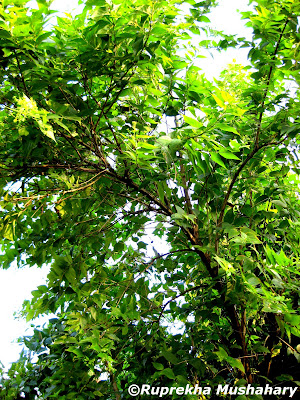 As I lay awake on my bed last night, like many nights when sleep eluded me, a sudden gush of perfumed air filled up my room. Inhaling deep I realized it was morning already, 4'o clock. To my utter surprise, the bolt of the long shut window gave way, unable to withstand the wear and tear of many autumns. The window was wide open in front of me now. I could never gather courage to open this window once it was shut, hence, I froze before it, losing all strength to shut it again and tie with a string. Had the cool  autumn breeze done what I couldn't ? The fragrance of Sewali hit me hard, made my head feel like cotton wool. With a half uncertain fear in my heart, I looked through the open window. 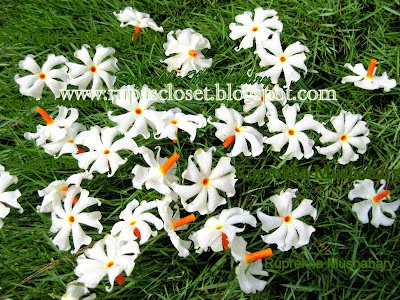 I could see the first ray of sun had fallen on the lawn now which was covered by the fallen flowers of Sewali. They looked the same Sewali we picked up years ago, same smell. The dew drops glittered like pieces of genuine gems as the sun's ray touched them softly. A sudden longing to feel the petals of Sewali rose in me, a sudden urge to step on the damp grass and inhale the raw smell I so loved! My heart drumming ever faster now. One last effort to hold myself back from stepping ahead was but in vain. With slow yet firm steps I walked down the stairs leading to the garden, bare feet. Too many years, yes, too much tears later, I have gathered the courage to step bare feet on the dew soaked damp lawn yet again to feel my autumn once again. As I put my bare feet on the grass, the damp, yet sensuous feel seeped in from my feet. Inhaling deep, closing my eyes I  stretched my hands out and stood there for didn't know how long. A breeze that passed by touched me gently leaving a sweet fragrance that filled up my mind and heart. Mesmerized, as if in a trance, bending down I started picking up Sewali.... one now, then another, spreading the anchal with my hand I went on picking Sewali. A tiny ant tried to crawl on my bare foot, shaking it off I wanted to giggle like I did with Sewali years ago, but instead, few drops of tears fell off my eyes to my bare feet sliding down to the grass, mingling with the dew drops which now shone even brighter in the ray of sun, the soft ray of the autumn sun  ......