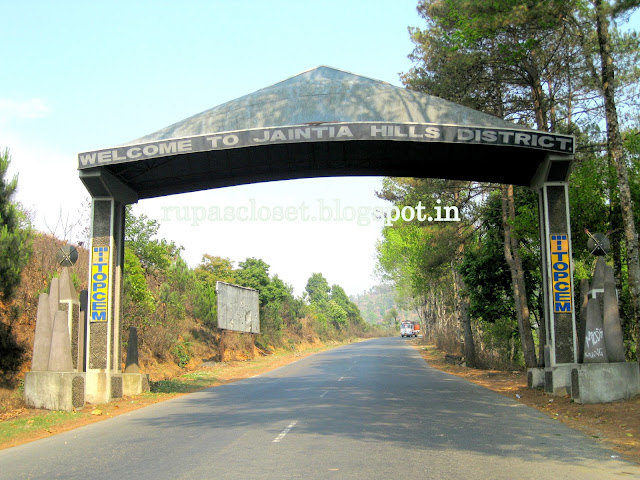 March is a lovely time to be on the hills of Meghalaya, when the climate is in one of its finest. The weather, enticing and the scenery, picturesque. On one such pleasant morning, I decided to take a trip to the Jaintia Hills District. It was lovely driving through the hills, stopping occasionally to capture the tranquil surroundings.
My destination was the Durga Temple, the Monoliths of Nartiang and farther east, the Thadlaskein Lake.
Starting from Shillong going East, on Jowai Road as the soft glow of morning sun bathed the lush green hills. Heavy traffic slowed us down to just 10 to 15 kilometres per hour at the beginning but gathered speed gradually as we proceeded after crossing the city limits.
Driving past villages and pine covered hills was gratifying. 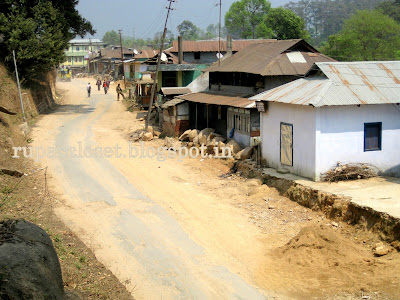 A view of Nartiang village

Nartiang is around 65 kilometres from Shillong. This small village was the summer capital of the Jaintia kings. My first stop here was the Durga Temple. The original structure of the temple was similar to a typical Khasi house, with a thatched roof over a central wooden pillar. Later the thatch was replaced by a corrugated tin roof. It had been further modified and reconstructed by Ramakrishna Mission of Cherrapunjee in the year 1987 to preserve, protect and encourage the tradition, faith and culture of the people. 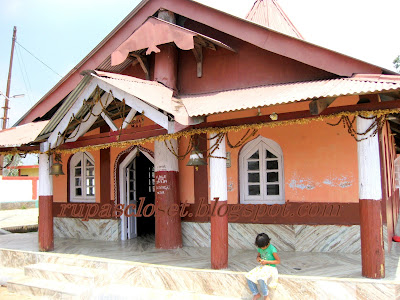 The temple stands today, nondescript, to tell the tale of  Hindu heritage of the Jaintia kingdom which dates back to around 1446 A.D. This 500 year old Durga temple is one of the "Shakti Peethas" of Hindu Mythology. Although Shakti Peethas are well known all over, this particular one is an exception.

Shakti Peetha : Legend has it that King Daksha never liked his son-in-law Lord Shiva who is dressed in leopard skin, snakes entwined his neck, body smeared with ash, matted hair and went around begging for alms. But he had to bow down to his daughter Sati's wish to be Shiva's wife. Soon after the marriage King Daksha went to pay his daughter and son-in-law a visit. It was at noon while Lord Shiva was taking a siesta. His attendants had refused to wake Shiva up. Daksha felt utterly humiliated thinking Shiva did it purposefully. Daksha disliked Shiva more now and waited for his opportunity to take revenge.

Daksha's opportunity to settle score came soon. He arranged for an elaborate performance of holy sacrificial ritual (Yajna). All important people were invited to the holy ceremony. All except Lord Shiva. Despite Shiva's forbiddance, Sati went to attend the holy ceremony. After all, Sati thought, she did not need an invitation to attend a function at her own father's home.

Daksha ridiculed Sati and belittled Lord Shiva in front of the guests as soon as Sati arrived. Unable to withstand the insult, Sati jumped into the sacrificial fire before the very eyes of the entire gathering that  stood watching in utter disbelief. Shiva was mad with rage when the news reached him. He held Sati's body up and started the "Tandava Nritya". Carrying the body of Sati he travelled from place to place, crossing hills, valleys and rivers. The world shook under Lord Shiva's fury. Frightened, the Gods went to Lord Vishnu for help. Vishnu released his "Sudarshana Chakra" which sliced parts of Sati's body. Gradually Shiva calmed down. The places where parts of Sati's body fell are known as 'Shakti Peetha". Temples are built on these spots and worshiped with great devotion. 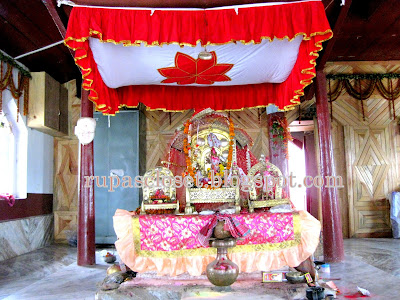 Sati's left thigh had fallen on Nartiang, Jaintia Hills. Durga is known here as Jainteshwari. The other two Shakti Peethas of North East are Kamakhya at Guwahati, Assam and Tripura Sundari at Udaipur, Tripura.
The temple, which was a part of the fort of erstwhile Jaintia kingdom, was built by Jaintia King Dhan Manik. Goddess Durga appeared in his dream and narrated the significance of the place. The Goddess also asked him to build a temple on that particular spot. Following his dream the king built this temple.  King Jaso Manik had married Lakshmi Narayana, the daughter of Nara Narayana the Hindu King of Koch clan. It is believed that Lakshmi's influence was instrumental in Jaintia Royalties embracing Hinduism. 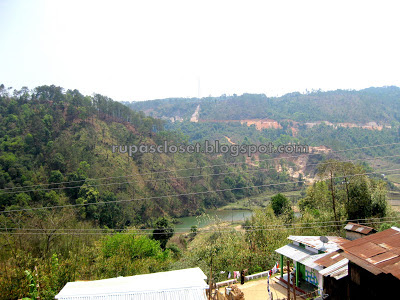 Rituals of this Durga temple is a blend of Hindu and ancient Jaintia tradition. There are some 500 odd Hindu families who live around Nartiang, come to worship in this temple. The chief patron is the Jaintia chieftain locally known as the Syiem.
The temple holds the same alter, idols and swords that were used for human sacrifice centuries ago before the idol of Goddess Durga. However, this practice was banned during the British rule. 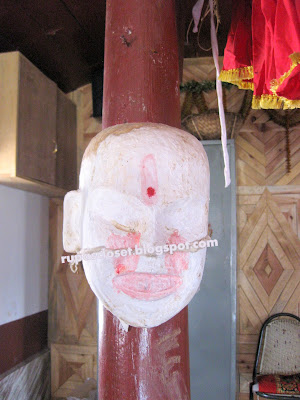 The mask that is put on a goat during sacrifice.

The custom of sacrifice is on even today. On the 8th day of Durga Puja, Mahashtami, a goat is sacrificed, dressed in a 'dhoti' and human mask. The goat symbolizes a man, thus keeping the custom of human sacrifice. The heads of the sacrifices were disposed through an opening on the floor of the temple. This hole is linked with an underground tunnel which joins the river Mintdu. Same method is followed in the procedure of sacrifice and disposing the heads in the river even today. The opening to dispose heads of the sacrificed.

A banana plant is dressed as Goddess Durga and worshiped during the ten days of Durga Puja and ceremoniously immersed in the river Mintdu with a gun fire salutation.
A family of priests from Ujjain looks after and performs the religious rituals of the temple. During my visit, I met the present priest Uttam Deshmukh. He could not recollect much of the history. Although said, he is the 29th generation of priests from his family.
A central Puja committee of the Hindu community in the state of Meghalaya takes care of the temple, including the maintenance. Devotees visit this temple from far and wide during the Durga Puja. 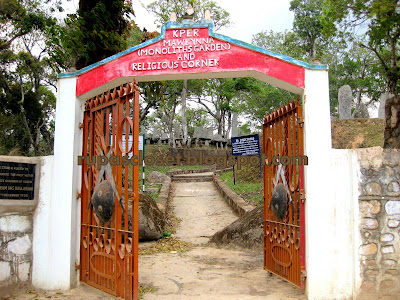 Getting into the car with my head full of history from the temple, I continued further up to north of Nartiang market. This place is known as Rawmulong, known for the Monoliths.
Monoliths exist throughout the length and breadth of the Khasi and Jaintia Hills. However, the biggest collections of Monoliths or Megalithic stones are found only here at Rawmulong, Nartiang. 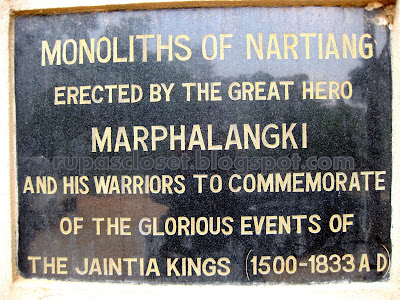 The Monoliths consists of the Menhirs (the upright stones) locally known as Moo Shynrang (Men) and Dolmens (the flat stones in the horizontal position) known as Moo Kynthai (Women). 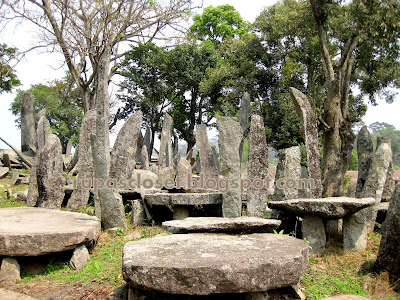 These Monoliths were erected approximately during 1500 A.D. and 1835 A.D. to commemorate the glorious events of the Jaintia Kingdom. 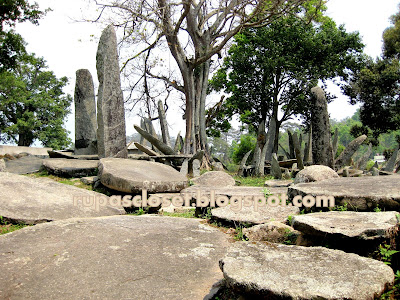 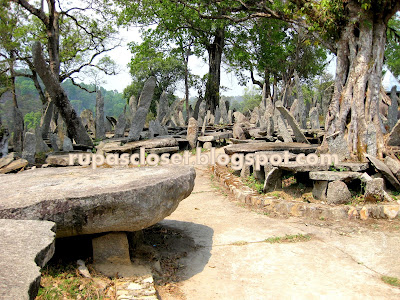 The other Monoliths were erected by U Mar Phalyngki, U Luh Lyngskor Lamare and various clans of Nartiang village. 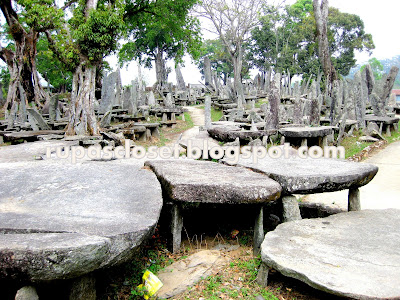 The Dolmens or the women, are generally supported by 3 or more stones on end. 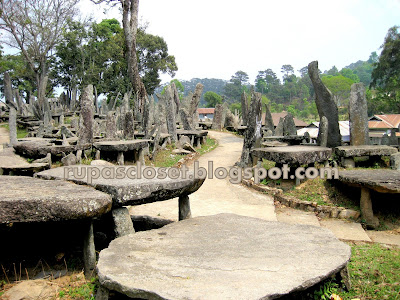 It is indeed overwhelming to walk along the path way and find yourself amidst these Monoliths. They have survived the centuries and will continue to intrigue those who visit. 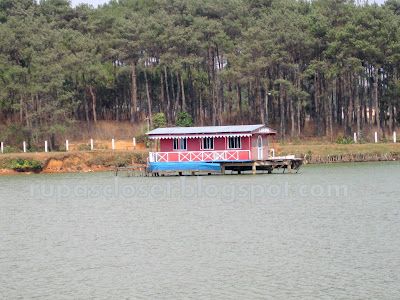 My next stop was at Thadlaskein Lake, a few kilometres further on Jowai National Highway 44. Its a beautiful man made lake.
Legend has it that Sajar Nangli, a Chieftain had an irreconcilable difference with the King of Jaintiapur.   To avoid an inevitable bloodbath he decided to flee from the Kingdom with his followers. However, he dug this lake along with his followers with the ends of their bows before departure. Thus it is believed that this lake was dug to commemorate their departure from the Kingdom. 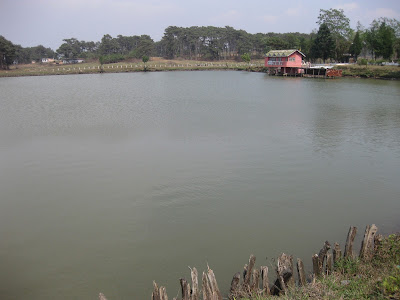 Lake Thadlaskein is revered by the people of Raid Mukhla who continue to offer sacrifices near the lake. It has been recently renamed as Sajar Nangli Lake.
Its a popular picnic spot. Boating by evening is very pleasant with the cool breeze blowing in your hair and a few birds occasionally flying past. 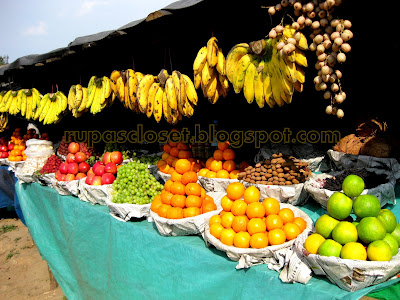 The return drive was enjoyable with the day's knowledge fresh in my mind. I was lost in all that I learnt on this lovely day-long trip to Nartiang. Leaving behind the breathtakingly beautiful Pine forests, tiny villages with cozy cottages, I head back to Shillong.
As I thought of putting my camera back for the day, a few colourful fruit stalls by the side of the road caught my eyes. Stopping the car I got down to sample some local fruits. 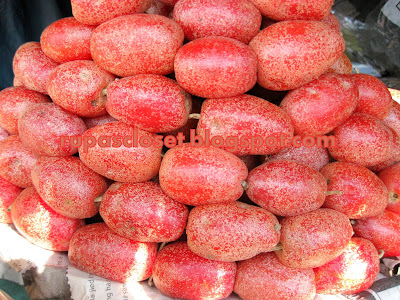 Although looked delicious, this fruit was sour. Locally known as Sohshang. 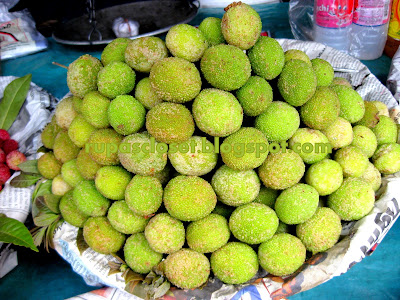 This tastes super sour. Local name is Sohphie. The expression of my face made the young girls in the stall burst into a laughter as I took a bite on a Sohphie. 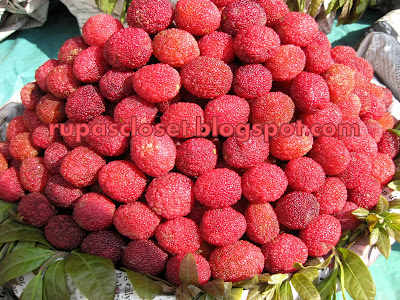 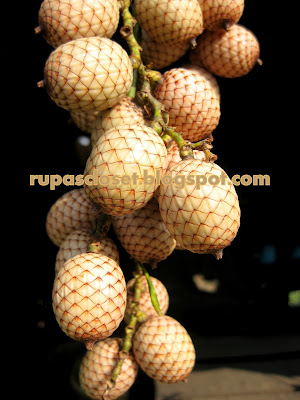 This looks so pretty. I bought a big bunch of this too but for hanging it as a decoration piece. Locally known as Sohtree. This one tastes awfully sour.

I must say, it was indeed a fruitful day!