Constitution Hill is the witness to the story of South Africa's turbulent past and its extraordinary transition to democracy. 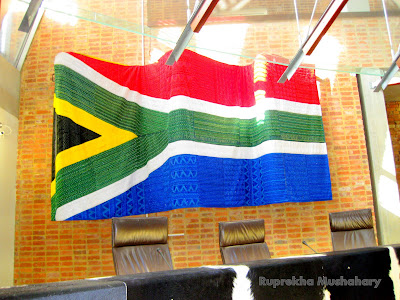 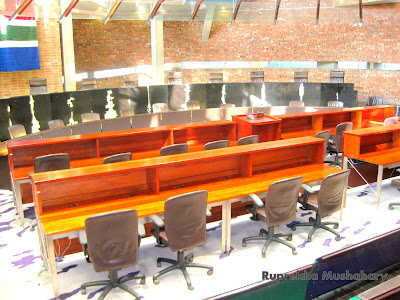 The eleven chairs along the wall are for the eleven judges

The court consists of eleven judges, headed by a Chief Justice and Deputy Chief Justice. Currently eight of the judges are men and three are women. Their duty is to uphold the law and the constitution, which they must apply impartially and without fear, favour or prejudice. 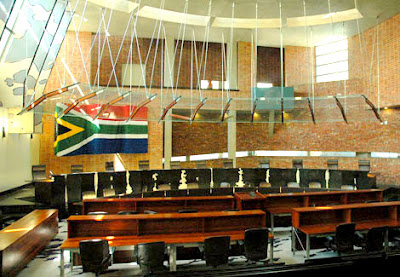 The Constitutional Court is the home of the Constitution, the highest law of the land. The new Court is designed to be open, accessible and transparent. It's built around the remaining stairwells of the old Awaiting Trial Block. The foyer of the Court is a light-filled area with slanting columns, an architectural metaphor for trees under which African villagers traditionally congregated to discuss important social matters with elders. Any member of the public may attend court hearings, or may enter the building to view the many individually commissioned artworks on display and I took the opportunity to click around merrily as photography is allowed everywhere. 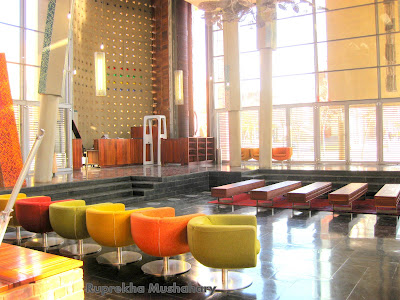 The sitting area for the visitors in the Court. 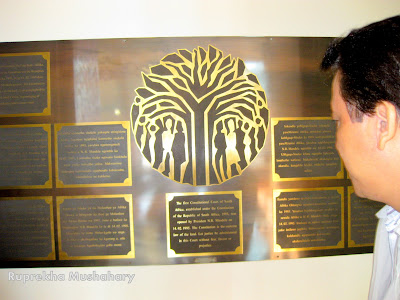 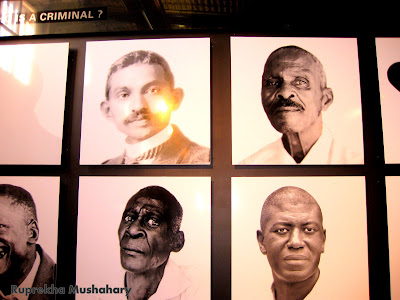 Constitution Hill is also the site of Johannesburg's notorious Old Fort Prison Complex, commonly known as Number Four, where thousands of ordinary people were brutally punished till the democracy in 1994. Many of South Africa's leading political activists, including Mahatma Gandhi and Nelson Mandela were  imprisoned here. With the move of the Constitutional Court to the prison site, what was once a place of injustice and brutality has now become a place of solidarity and democracy for South Africa. 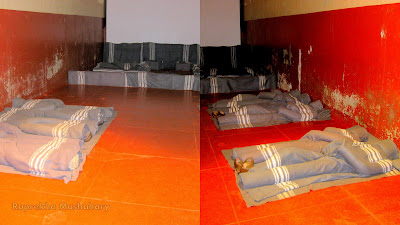 Recreation of a time during the apartheid for the visitors to have a glimpse. At times, as many as ninety men were kept in a small cell like this one.
Was shocked to learn how the prisoners were kept and brutally tortured in the prisons.
The old Fort was one of Johannesburg's oldest buildings built in the year1893. This was where the white male prisoners were kept, with Nelson Mandela being the only black prisoner to be held here.
The Women's Jail remains a mute witness to the endless pain and sufferings of the likes of Winnie Madikizela Mandela, Albertina Sisulu, Fatima Meer and other political activists.
The old prison cells have been converted into an interactive museum with a state-of-the-art audiovisual system that shows footage of prison artefacts, including recreations of the blanket and soap sculptures made by the inmates.
In collecting materials for exhibitions, content had to be drawn from often painful memories of people who were imprisoned at the jails on site. Ex-prisoners contributed remembering the spaces and reclaiming the dignity that they lost in Number Four, the Women's Jail and the Old Fort. The vivid memories of the people who lived through these awfully painful times have created unshakable impressions for us all to share. 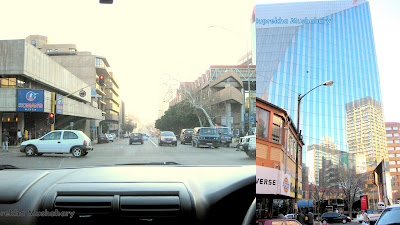 My visit to the Constitution Hill, coming face to face with the country's history, was a moment of pride for the 'Rainbow Nation', as Archbishop Desmond Tutu described post apartheid South Africa,  but drops of tears flowed in memory of many who with their pain and sufferings  brought about this freedom. This write up is my tribute to those who laid their lives at the foundation of today's freedom that South Africa enjoys.
Today the clean roads of the planned cities and preservation of greenery of SA are a pleasure to visit and sight seeing. 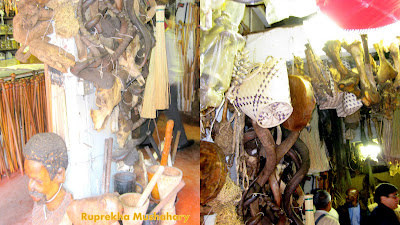 Interesting artefacts and curios on display in the shops of Down Town Johannesburg.


Johannesburg is the provincial capital of Gauteng, the wealthiest province in South Africa, having the largest economy of any metropolitan region in Sub-Saharan Africa. The city is the source of a large-scale gold and diamond trade, due to its location on the mineral-rich Witwatersrand range of hills. 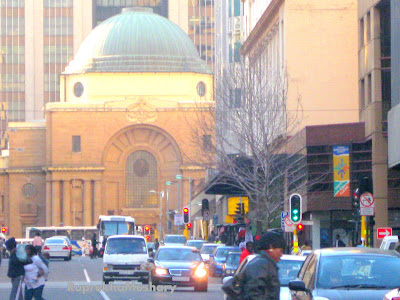 The Reserve Bank of South Africa 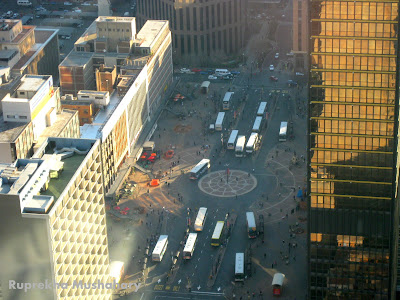 A bird's eye view of Gandhi Square from atop the Top of Africa, the tallest building and the highest point in South Africa ( 223 meters)

Top of Africa, on the 50th floor of Carlton Center is just the right place to sit and unwind with a glass of wine or beer after a long day of sight seeing around Johannesburg.
Gandhi Square is a plaza located in the Central Business District of Johannesburg, South Africa. It is named after Mahatma Gandhi.

Before it was named Gandhi Square, Van Der Bijl square was falling apart. It was in the centre of one of Johannesburg's most destitute neighbourhoods. Then, in the early 1990s, Gerald Olitzki, a property developer, approached the government with the project. Although initially denied, the project was eventually undertaken with the support of the government, and was finished in 2001, at a cost of approximately R2 million.
Never realized how the people of SA love and respect Mahatma Gandhi till my visit to this country.  Gandhi's clothes, sandals, pictures and few other items that he used during his imprisonment are on display in the Gandhi Exhibition of Constitution Hill and more items exhibited elaborately in the Museum of Apartheid in Johannesburg. 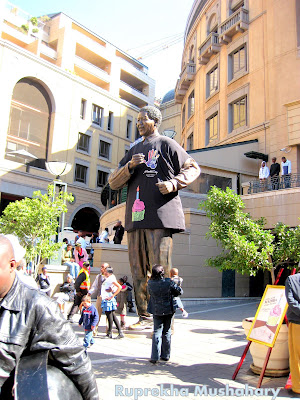 It was the 18th of July 2009, Nelson Mandela's 91st birthday. As the day turned out to be a pleasant one with the sun shining its brightest as if in happiness, wishing the great anti apartheid leader on his birthday. We decided to visit Nelson Mandela Square on this pleasant winter morning.
Nelson Mandela Square is in the posh Sandton City, a few minutes drive from down town Johannesburg. A beautiful city, with clean roads and posh malls and lovely eateries. Sandton is a wealthy area situated within the metro of Johannesburg, Gauteng, South Africa. The name comes from the combination of two of its suburbs,Sandown and Bryanston.
Celebration and merriment was on, all over the place.
People here are passionately in love with their country and their heritage. Every single person  I met was friendly and helpful.  South Africa will always remain in my heart as a fond memory, a dear friend who had been comforting and did not let me miss home even for once  while so far away .....